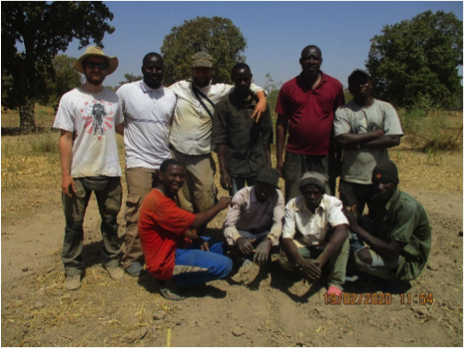 This February, the project completed its second fieldwork period, this time in southern Mali. For Esther, this was a chance to put into action the field methods of Visual Linguistic Anthropology she had developed with Henning in Gambia. This time it was with potting and blacksmithing families in southern Mali. The aim was to document the chaîne opératoire and capturing concepts of the creative process of ceramics, tools and artefacts, in order to gain an extended view of the production of ceramics in the context of the Maninkakan speaking population here. While Malian ceramics are well studied in ethno-archaeology, this is an area where there was still a gap in the research that we wanted to fill. For the archaeologists, this was a chance to generate some data in an area where there was very little done so far.

Together with our partners in Mali, Mamadou Cissé and Daouda Keita, we had decided on the village of Kéniéroba as a base. There are two important potting communities near there – at Madina, and at Kansamana on the right bank of the River Niger. The area had been surveyed before by Mamadou Cissé, but he thought that we could benefit from another closer survey.

As usual, we spent the day of our arrival at Kéniéroba in negotiations. First with the village council, who agreed to what we wanted to do. Then with various local people about water, food, and lodging.

The following day, our survey could begin. We used an informant-led approach and were guided by two locals, both named Moussa Keita. During two days, we were able to visit twelve sites, ten of which were showed to us by the two Moussa Keitas. You can see a map below: 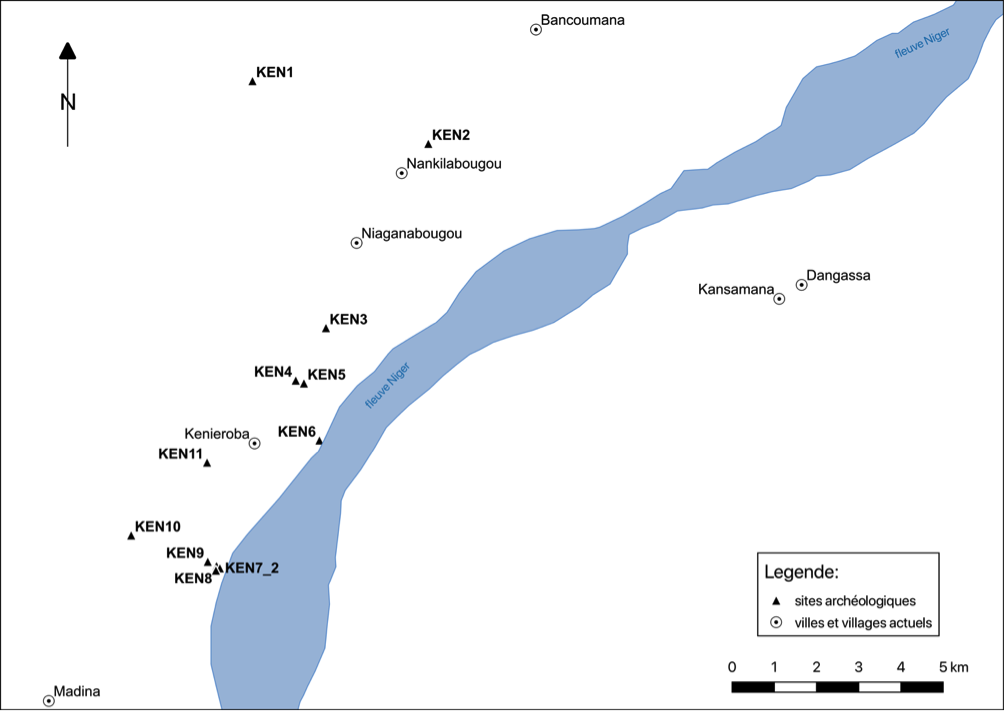 The sites we recorded were all habitation sites, since this was what we were looking for. We cannot exclude the existence of other sites in the area (tumuli were mentioned as existing in the bush, which the local hunters know as korokoro), but we didn’t look for these, as we wanted stratified sites with pottery, ideally from before the 16thcentury, which has been rare in this area so far. Several of the sites we found were the remains of villages, some quite large. Other sites appeared to be individual homesteads or small hamlets. The surface finds everywhere included fragments of pottery, grinding basins and hand grinders, iron objects and sometimes slag.

We were particularly taken by one site, Bérénindankan (KEN6). This was on the banks of the Niger river and consisted of two mounds. There was a large amount of slag on the surface, but also hand grinders and pottery fragments. It looked to us like an ironworking operation that had taken place within some form of settlement. Since blacksmiths families traditionally also practice pottery in this area, and because the proximity of the site to the river might have given it access to wide-ranging contacts, the Bérénindankan seemed promising for our project. We therefore decided to excavate there first. 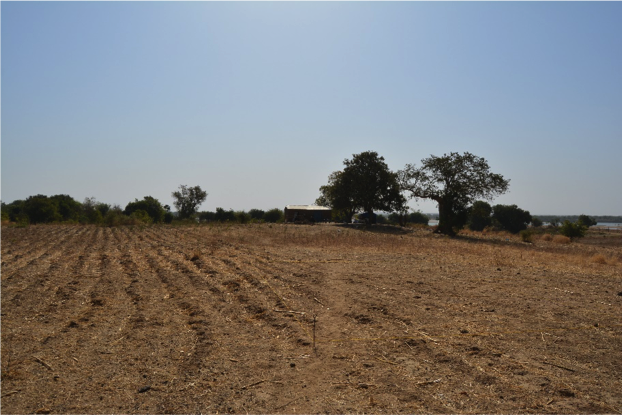 Together with five local workers chosen by the village council, a 5x5m trench was opened on a hilltop on the site close to where the Niger would reach its maximum in the rainy seasons. After we had removed the surface layers, which had many finds of slags and ceramics, we reached a layer with several burned spots together with a concentration of slags, tuyères and ceramics in the southern part of the trench. This could be an indication of a refuse layer, but because of our time schedule we decided not to excavate this area further.

We opened a smaller 1x4m test trench in the northeastern part of the trench under one of the burned areas. The trench revealed further layers with heavy concentrations of slags together with tuyères and household ceramics, but we noted the lack of bones and bigger pieces of charcoal. These layers were interpreted as refuse layers from the possible metallurgical activities. At the depth of 80cm we reached a layer of heavy clay with inclusions of riverine pebbles indicating a river-deposited layer. It included some thin-walled ceramics with a different clay paste composition than from the layers further up. These were interpreted as possible Neolithic sherds deposited by the river. We hope that C14 analysis will clear this matter. The excavation was terminated at the depth of 110cm without reaching sterile soil. Due to the heavy clay nature of the deposits, excavation was hard work and could proceed only slowly. We therefore decided to use the rest of our time to test a more clearly domestic site. 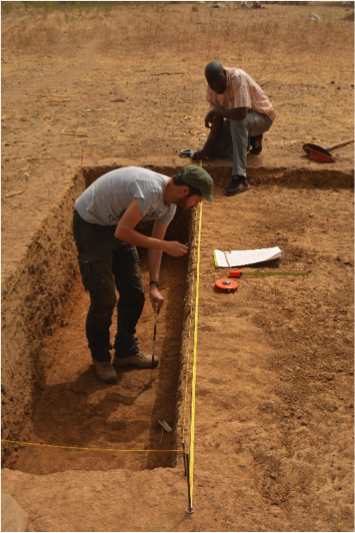 The Somonola site was chosen because of the high mound dominating the area which could indicate a long period of settlement activity. The excavation was started and terminated the same day because, after about 5cm, we reached a natural laterite subsoil. The surface survey revealed, apart from grinding basins and stones, a lot of household ceramics indicating settlement activity, but the mound was natural, not man-made.

Our final test excavation site, Bankassi, was chosen because of its clear settlement context indicated from our surface survey, where grinding basins, hammer and grinding tools and household ceramics were found. A 4x4m trench was laid out off the summit of the highest of several neighbouring mounds. 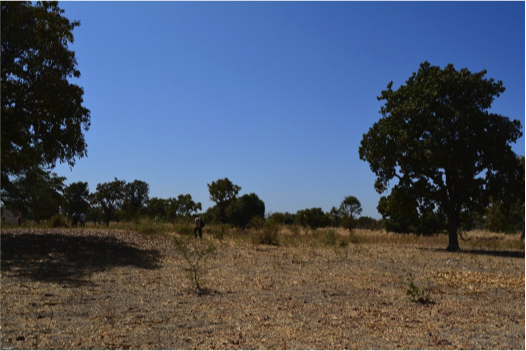 Area view of the Bankassi site

After the first 5cm of surface soil were removed, we were able to document the remains the stone foundations of a curvilinear structure in the south/eastern part of the trench. Domestic ceramic sherds were found inside the structure. Outside the structure was a light grey rather sterile compacted layer interpreted as a living floor and possible collapsed structures. Subsequent layers beneath had the character of refuse layers filled with many sherds of domestic ceramics together with few very fragile bones and many bigger pieces/concentrations of charcoal. 2 concentrations of ceramics had sherds which can be refit, suggesting they broke in situ.

After about 20cm we reached another stone structure in the eastern part of the trench. Approximately 30cm north of this wall a concentration of human bones was found. We identified the front teeth and a molar found as belonging to a child, because of the small size of the teeth and the fact that no dental roots were attached to the molar. The teeth were found in the southern part of the concentration and two long bones (possible femurs) were found pointing north indicating a north/south deposition with the head towards the south. The burial was excavated as a block-deposit. Bones material was very degraded on all the sites we excavated, so this block will need the work of a specialist – if anything can be salvaged at all.

We had to finish excavations at a depth of around 25cm, but are hoping to return. We have had a mixed season – not all a shining success – but we are eagerly waiting for our radiocarbon dates to see what period the sites are from. 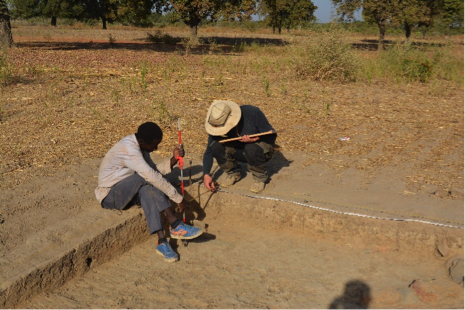 Our excavations gave us a better understanding of the archaeological material and settlement activity from the Kéniéroba area in southern Mali. Bérénindankan revealed metallurgical activities near the river Niger, which is further testimony of the long tradition of extracting and working with metals from the whole West African region. The Bankassi site gave us a glimpse of the settlement traditions, which, together with our field surveys, gave us an idea of the settlement patterns in the area. We’re looking forward to getting the sites and deposits dated now.

For ceramics, this was definitely an interesting season. We documented 23 new roulette types, 16 new rim types and 2 new base types, all of which we will need to analyse in detail in the lab. The archaeological ceramics here are very different from those we have previously encountered downriver on the Niger, at least in terms of appearance and decoration. There are, however, some commonalities, so this season will provide food for the mills of our pottery-based network model of interaction along the Niger.